The Adoption of ISA/IEC 62443 as a Malaysian Standard

END_OF_DOCUMENT_TOKEN_TO_BE_REPLACED

The Adoption of ISA/IEC 62443 as a Malaysian Standard

On 12 November 2020, PETRONAS became a founding member of the International Society of Automation's (ISA) Global Cybersecurity Alliance (ISAGCA). By February 2021, we started joining ISAGCA Government Relations – Asia Pacific meetings where I first met Andre Ristaino, Managing Director of ISAGCA. We learned that ISAGCA aspires to designate and reference the ISA/IEC 62443 standard in a country’s law and regulatory policy. So, for Malaysia, we had started our efforts to support that.

In March 2021, we contacted the Malaysian National Cyber Security Agency (NACSA), the national lead agency for cybersecurity matters. However, we did not get any reply. We then contacted the Malaysian Communications and Multimedia Commission (MCMC), who later invited us to present to them on 7 April 2021. We invited Andre Ristaino, and he supported us to detail out the background of ISA/IEC 62443 and the intentions of ISAGCA to MCMC.

Midway through the meeting, MCMC explained to us that they are only a regulator for the converging communications and multimedia industry in Malaysia, meaning that matters pertaining to designating or referencing an international standard into Malaysia is not under their jurisdiction. MCMC suggested to us that we approach the Department of Standards Malaysia (DSM).

We successfully reached consensus within the committee to adopt the three international standards as they were without any major changes. The MS would be identical to the corresponding ISA/IEC 62443 standards. However, for the purpose of MS, the following minor applications were necessary:

At the time of this writing, the three documents are currently undergoing public comment from 15 August 2022 to 14 October 2022. 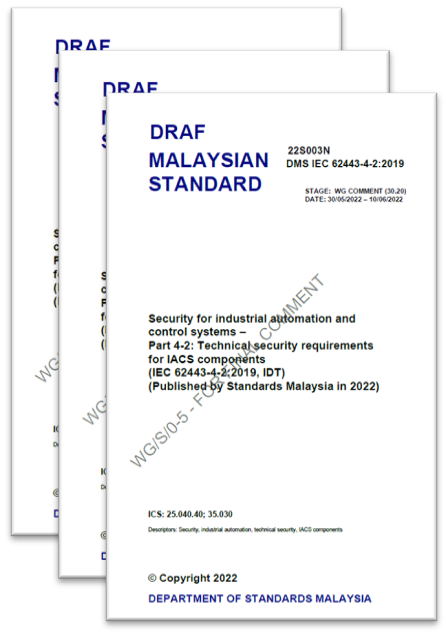 First, in promoting the adoption of a particular international standard as a MS, we did not get the correct department right the first time. We spend a few months figuring that out.

Secondly, there was a long interval from one milestone to another, typically a few months in between. It was very likely that the government agencies had internal stage gates that did not make the process any faster.

Lastly, we were new to DSM, yet they requested us to lead a Malaysian WG review committee comprised of more veteran members. It was during the height of COVID, so we couldn’t meet those members physically. We couldn’t establish any initial face-to-face bonding, so we felt a bit at a disadvantage leading the committee. Fortunately, the WG members all acted professionally, cooperated very well, were timely, and even offered help connecting us with more members. 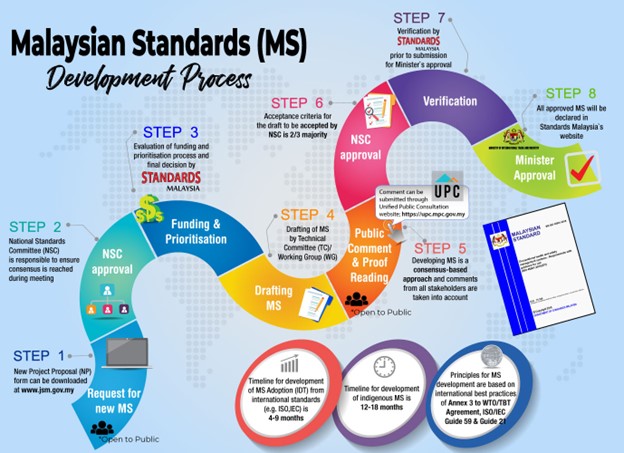 The adoption of ISA/IEC 62443 in its entirety is a continuous process.

ISA/IEC 61508 and ISA/IEC 61511 were adopted in 2010 as MS ISA/IEC 61508 and MS ISA/IEC 61508. By adopting these international standards as MS, small and medium enterprise (SME) industries in Malaysia are able to buy and access the standards at subsidized and therefore affordable prices. With full access and therefore conformance to the MS ISA/IEC 62443 standards, SMEs can improve their cybersecurity maturity. This will help Malaysia achieve cybersecurity resilience, thus protecting against cyber-attacks. Foreign investors will have more confidence to invest in Malaysia and thus boost our economy further. The vision to ultimately improve Malaysian society’s quality of life and achieve global competitiveness for Malaysian products and services can therefore be achieved. We look forward to adopting the other remaining standards next. 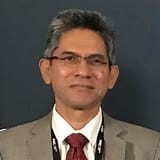 Sharul A. Rashid is the PETRONAS Group Technical Authority and Custodian Engineer, Instrument and Control. He is co-chair of the Certification Work Group (CWG) of the Open Process Automation Forum (OPAF). He is also the Steering Committee (SC) member for JIP33 (IOGP) (International Oil & Gas Producer), the Vice-Chair ISAGCA (International Society Automation - Global Cybersecurity Alliance, Vice-Chair IASSC (Instrument Automation Standards Subcommittee) for IOGP. Additionally, he is the voting member for ISA-75 and NSC 19 / TC 15 for Smart Manufacturing. He is also the Team Leader for Smart City project for PETRONAS. Sharul has more than 30 years of experience in handling instrumentation and control issues in oil & gas, gas liquefaction, and petrochemical plant including pipeline transmission network. Sharul advises not only within his Group Technical Solution but also plant PETRONAS-wide on instrumentation and control issues. He is involved as an instrumentation expert in many key PETRONAS projects e.g. Kerteh Compressor Station, Peninsular Gas Utilization metering stations and MLNG Satu Rejuvenation and MLNG Dua Debottlenecking.